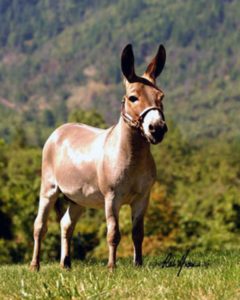 Countries of origin: Sicily and Sardinia

Without a doubt, America’s favorite breed of ass is the Miniature Mediterranean Donkey. America’s small asses are referred to as miniatures and mini-donks.  They were originally bred as working donkeys in Sicily and Sardinia islands located in the Mediterranean Sea, off the coast of the Southeastern and Eastern coasts of Italy.

Miniature donkeys first set foot on American soil in 1929 when New York stockbroker Robert Green received six Jennets and a Jack that he purchased sight unseen during a trip to Europe. The rest is history. A few other wealthy breeders during that time imported miniatures.

In the early 1950s, Daniel and Bea Langfeld of Danby Farm (famed breeders of world-class Shetland ponies) purchased a Miniature Mediterranean Donkey for their daughter, who had cerebral palsy. Soon they were major breeders with 225 donkeys their herd. The Langfelds widely promoted their miniature donkeys. In 1958, Bea Langfeld established The Miniature Donkey Registry, and in 1987 she turned it over to the American Donkey and Mule Society. Today there are more than 50,000 donkeys registered in the Miniature Donkey Registry studbook.

A second miniature donkey registry, The International Miniature Donkey Registry, was incorporated in 1992. It differs in that it registers donkeys in two divisions:

It also offers two, three, and four-star ratings based on each donkey’s confirmation. A third group, The National Miniature Donkey Association (NMDA), was established in 1989. NMDA is not a registry, but they promote miniature donkeys through the establishment of show rules and a comprehensive breed standard, as well as sponsor programs for owners of MDR-registered donkeys.

There is a lot to like about these little asses. They are loving, gentle, kind, intelligent, and loyal to a fault! They are economical to keep and feed and are extremely cute! Their popularity extends past the USA to Britain, France, Australia, Belgium, and parts of Europe.

To close with a quote from Robert Green, America’s first breeder of miniature donkeys:

“Miniature donkeys possess the affectionate nature of a Newfoundland, the resignation of a cow, the durability of a mule, the courage of a tiger, and the intellectual capability only slightly inferior to man’s. ”